Fans of Hip-Hop will always debate who is the best artist/rapper and have their reasons why, biases in full bloom. However what isn’t debatable or ambiguous are sales numbers as they speak for themselves, bias aside. With that in mind Eminem sits on top of the albums sold chart and has been king of that hill for quite some time, and it’s a sizeable lead. In fact, the guy who is number 2 on the list is someone you might have heard of is named Jay Z and he is almost 10 million album sales behind him. However now there is a new kid on the block that might not only threaten to crack that top ten but break it open. His name is Macklemore and if you’re a fan of music you’ve heard the name but you may not know the artist. You will now. 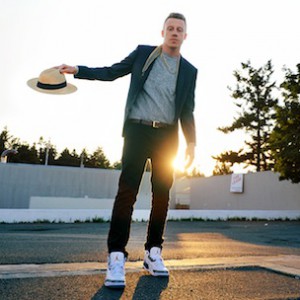 What he’s got that makes it work first and foremost is talent. Haters gotta’ give it up because he can deliver the goods, he’s not a poser or a fraud. Lyrically and socially he got a head on his shoulders and he uses it and his vocabulary with poignant accuracy. He ruffles feathers and provokes thought all the while having a style of his own with, God forbid, some decent fashion sense. This makes him a very dangerous combination for crossing over and engaging an audience of millions and growing. Simply look at the fan’s reaction at his festival shows which an underrated barometer of both popularity and potential because tens of thousands of people are not just there to see you and if you can bring it home and win them over, you’ve just made a new friend, follower, and product consumer. That quite simply is why this guy is a threat to the kings of the trade.

Forbes has him earning 9 million a year, even though he does his best to offend any type substantial backing from the behemoths of the industry or corporate sponsorship, and that’s the way he likes it. Although it will be hard totop his performance over the last two years with all of the Grammy and sales success, Macklemore promises his audience that he will have a new album on the shelves in 2015.

So the resume is a combination of city college grit and Ivy League ability, the only question now is how long can he keep things together and how high can he go? Well the next five years will go a long way to answering that question, but at his pace look to see his face written on the same stone of those you know on a first name basis.