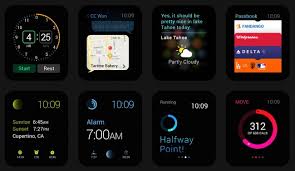 Under the heat of intense completion, particularly in the fitness arena from up and comer Fit Bit who is just coming off their successful IPO day, Apple’s design expertise is only a small part of what makes the Apple Watch stand out. Another factor in its favor is the user interface.

The problem many current smartwatches have is that the UI is packed on to a tiny display and you need to manipulate those tiny visual elements using your fingers, which are inevitably bigger than the elements you’re trying to touch.

The Apple watch runs a scaled-down version of iOS, but it’s not iOS as you know it, so you will have to learn what all the little icons mean and how things work. Once you get the hang of it, the Apple Watch apps, along with the glances and notifications, are easy to use. However, getting to that point can be a bit confusing. There are so many ways to interact with the Apple Watch that it’s not always clear whether you should tap, scroll, swipe or push.

Early reviews of the Apple Watch tended to complain that the interface wasn’t intuitive and that there were so many different ways to do things that it wasn’t obvious which should be used. Sometimes you drag the screen around with your finger, other times you tap an icon or on-screen button, or you press the screen a bit harder to see new options. And then there are occasions when you use the Digital Crown.

There are certain behaviors on the iPhone that you expect to encounter on the Watch but aren’t there. You can’t view running apps by double-tapping the home button and you can’t close them by swiping up, for example. You can’t put apps in folders – which would make it easier to manage things when you have lots of apps on your Watch. We could hardly find the apps we were looking for most of the time, and there weren’t very many apps on there.

While doing our best to extend the watch’s battery life, we wanted to force-quit some apps, and found the method of doing so deeply counterintuitive. It ought to be as easy to quit apps and glances as it is on the iPhone but unfortunately it isn’t. To quit an app you have to press and hold the side button, and then do the same again. Nobody is going to stumble on that by accident so that is a check on the negative side of the ledger.