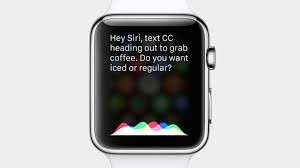 Using Siri on the Apple Watch

Among Apple’s climate changing creations that engraved a competitive advantage and loyal fan base, was their voice recognition interface more commonly known as Siri. Apple’s personal assistant first arrived on the iPhone 4s, and over the past four Siri has improved somewhat, and I find myself using it often but primarily to dial numbers and prompt searches. However, Siri may really come into its own with the Apple Watch.

Initial testing of the Apple Watch took place in a busy room and the general consensus appears to be that Siri worked well despite the noise. You can continue to use Siri to search, set reminders, or you can dictate messages that it will transcribe. Alternately, you can just record messages your message and send it from your Apple Watch. Just raise your wrist and say “Hey, Siri”, or press and hold the Digital Crown and you can dictate messages or request turn-by-turn directions. After several weeks with the device, however, our opinion of Siri on the Apple Watch has fallen somewhat.

When texting we pretty much gave up on trying to use dictation as the device always got it wrong, and it’s not easy to correct it like it is on the iPhone. (On the iPhone you could just edit the text it thinks you’ve said using the keyboard, which obviously isn’t an option on the watch, and that’s probably the reason why emails can only be read, not sent.) You would be better off sending the voice recording rather than trying to use Siri to write a text.