In the film “Julie & Julia” the premise of the film was about a blogger that wanted to make every dish in the Julia Child cookbook “Mastering the Art of French Cooking” and it seemed one of the points Nora Ephron really wanted to get across was how difficult it was to make these dishes correctly. Upon further investigation it also seemed they take quite a long time, in some cases longer than a day, where you start the prep one evening, come back and cook most of the day and hopefully finish in time for dinner. Well, for most of us that’s really practical. even when we set aside an afternoon to prepare a meal for family or friends. So we’re going to try and take the basic premise of the recipe made famous by JC, but existing long before her, and re-raise her by incorporating some basic modern kitchen tools and cut either the time, task, or preparation but none of the taste or end result. Thus, making a great weekend dish more attainable for the rest of us that aren’t writing a book about cooking but just want a tasty meal that may also impress the hell out of our guest. 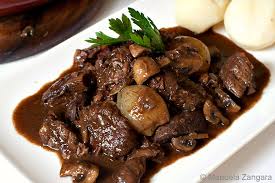 Boeuf bourguignon is all about building flavor, one step at a time. Layer upon layer upon layer starting with the bacon. That said, start by cooking the bacon, but don’t overcook it. Render all the bacon fat and then use the grease to sear the cubes of beef and then cook the vegetables. Searing the beef and using a portion of the wine to deglaze the pan adds two more layers to the dish. After an afternoon of simmering (a method which is its own kind of flavor booster), the bacon bits and tender mushrooms get stirred into the stew for the grand finale, but we don’t need them for a while so set them aside.

The end result of all this careful attention is a stew of surpassing richness and complexity — a stew to impress a date, celebrate a winter birthday, or even serve up for Christmas. Choose your friends wisely when preparing them Boeuf Bourguignon, because you will likely find them at your door again next week with begging bowls in hand.

Now the first time I read about the beef recipe with the funny name was out of Julia Childs’ The Art of French Cooking cookbook where she used a conventional oven and cooked it very slowly, you may be able to one-up her by not only making more practical but, sadly speak, improve the taste as well. Two modern devices that the Godmother of French Cuisine didn’t have at her disposal were the slow cooker and the pressure cooker. There are ways to simplify the beef simmering process both with excellent results. Either way, be prepared for a bit of prep work. This is not the kind of dish where the ingredients can be dumped together in a pot, but rather one that takes some time at the stove before you can “set it and forget it.”

When I make this in the slow cooker, I often prepare the meat and veggies the night before and then put everything in the slow cooker the next morning so they can simmer all day. When I prepare it in the Dutch oven, I start early so I can be sure it will be ready by dinner — or I make it the day ahead. The stew reheats well and is one of those dishes that tastes even better the second or third day. 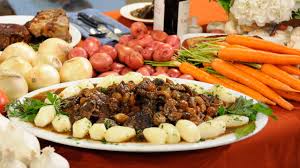 P.S. Classically, Bouef Bourguignon is finished with pearl onions as well as mushrooms. I think there’s quite enough going on with this dish without either a) going to the trouble of preparing pearl onions myself, or b) falling back on frozen onions, so I skip them. This said, if you are a stickler for tradition or just love pearl onions, add a pound of them along with the mushrooms at the end of cooking.

Warm a stainless steel or cast iron skillet over medium-high heat. Add the bacon and cook until the fat has rendered and the bacon is golden and crispy. Remove the pan from heat and transfer the bacon to a plate lined with a paper towel to drain. Pour off all but a tablespoon of bacon fat from the pan.

Return the pan to medium-high to high heat. Pat the beef cubes dry and sprinkle them with salt and pepper. When the bacon fat is shimmering and you see a wisp or two of smoke, add a single layer of beef cubes to the pan to sear — do not crowd the pan; sear the meat in batches. Let the beef sear without moving until it releases easily from the pan and the underside is golden-brown, 1 to 3 minutes. Flip the pieces and sear on the other side. Again, let the meat sear without moving for 1 to 3 minutes until they release easily from the pan.

Transfer the seared meat to your slow cooker or a clean bowl. Deglaze the pan with 1/4 cup of the wine. Scrape the dark glaze and any crispy bits from the bottom of the pan as the wine simmers. When the pan is clean, pour the wine over the seared meat.

Add 1 tablespoon of leftover bacon grease to the pan. Continue to sear the meat in batches, deglazing the pan between each batch.

When all the meat is seared, add another tablespoon of bacon grease to the pan and reduce the heat to medium. Cook the onions with 1/4 teaspoon of salt until soft and browned, 6 to 8 minutes. Add the carrots and celery, and cook until softened. Add the garlic and tomato paste, and cook until fragrant. Transfer the vegetable mixture to the slow cooker or bowl with the meat.

Wipe the pan clean and warm 1 tablespoon of leftover bacon grease over medium heat (use vegetable oil if no more bacon grease remains). Cook the mushrooms with 1/4 teaspoon salt until they have release all their liquid, the liquid has evaporated, and the mushrooms are golden brown, 8 to 10 minutes. Transfer the mushrooms to a clean bowl and set aside — keep the mushrooms separate from the meat and onion mixture (they get added later).

→ Slow Cooker Method: Stir the beef cubes and vegetables together in the slow cooker with 1 teaspoon of salt. Tuck the sprigs of thyme and the bay leaf into the mixture. Pour the stock and the remaining wine over the beef and vegetables — the liquid should come about 3/4 of the way to the surface of the ingredients.

Cover the slow cooker and cook on low for 6 to 8 hours. When finished, the beef should fall apart easily with a fork.

Cover the pot and place in the oven. Cook for 2 hours, then begin checking the meat every 15 minutes. The dish is done when the meat falls apart easily with a fork. Exact cooking time can vary.

Both Methods: Once the meat is cooked, stir in the reserved bacon and mushrooms. Cook with the slow cooker on high or simmer in the Dutch oven over medium heat until the mushrooms are warmed through, about 10 minutes.

Serve in bowls over noodles or with crusty bread on the side. Sprinkle with parsley before serving. Leftovers will keep for up to a week or can be frozen for up to three months. 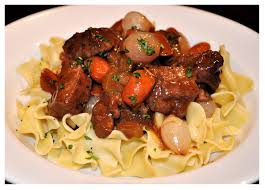