I couldn’t put this book down it is the best Dan Brown book since the Da Vinci code. Not to put any spoilers in this review but Robert Langdon has amnesia and is trying to put the pieces together and through the entire book you are as lost as he is; but in a good way. Every time you think you have figured out what is really going on Brown throws in another twist and you are lost again. Even the ending of the book is atypical and not just all tied up with a neat bow and a happy ending. In addition to this being a great read as with all Brown books you get an education about Italy’s history and the history of so many great artists. I spent a lot of time on Google images searching all the art mentioned and learning a bit more about Dante than I ever thought I would want to know. In fact I have already downloaded The Divine Comedy to read since last time I read that I was forced to in High School English class and I tend to block a lot of that out. 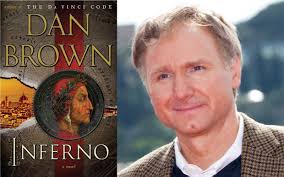 This book has already been voted as one of the best books of 2013 and received 4 & 5 star reviews. Even so there are still plenty who think this book is more of a tour guide of Italy and know it all book but those are just opinions…and everyone has one what’s yours? The book will not be just a book much longer Tom Hanks and Ron Howard have already started working on the movie. Now they did make Angels and Demons which I thought was a poor book and even worse movie but I have high hopes for this one; even though I think Hanks is a little old to be Robert Langdon. Do you agree?