Aalst Santa Clause has punched the clock and booked his ticket to the Caribbean for the off season, the yule logs are now smoldering ashes, and the any remaining Egg Nog has gone bad. Also the season of obligatory Christmas parties and counting the hours until the fish/relatives/in-laws leave, has come to an end. However somewhere in the midst of the office holiday party and the neighborhood annual reunion, there were some lessons to be learned about the art of entertaining and if you were paying attention you might have picked up a thing or two on things people were right, conversely what they were doing wrong. So we wanted to start this segment on how to put the finishing touches on entertaining at home.

So you’ve taken the time to step up your game up and expand your knowledge of wine, and keeping up with your reading here has helped I must say, you probably also have learned a thing or two about the finer spirits being served at both home date nights and power cocktails. With that in mind this series will be about putting the finishing touches on what you serve your liquid dreams in. Over the next few post we’ll try to provide you with some timeless as well as trending ideas in glassware for Bourbon Glasses, Whiskey Glasses, and of course wine glasses.  We begin with golden nectar of the Gods, Bourbon and Whiskey, but first a brief education even though you’ve probably heard it before: all bourbon is whiskey, but not all whiskey is bourbon. If you’re a whiskey (and especially bourbon) drinker, you need to know what that means. By definition, whiskey (or whisky, in Scotland) is a spirit distilled from fermented grain mash grain varieties include wheat, rye, barley, and corn and then aged in wooden barrels. Whiskey is made all over the world and there are many popular styles including Scotch whisky, Irish whiskey, and American whiskey. The most popular form of American whiskey is bourbon, which has its own specific definition.

What Makes a Bourbon: A Cheat Sheet

“Bourbon Whiskey needs to be produced in America and made from 51 percent corn, whiskey does not,” says Maker’s Mark Master Distiller Greg Davis. Your best Bourbon also needs to be stored in new, charred oak barrels whereas whiskey barrels do need to be oak but not new or charred. “Lastly, to be called bourbon, the liquid needs to be distilled to no more than 160 proof and entered into the barrel at 125.” For other whiskies the liquid must be distilled to no more than 190 proof. If you’ve followed some of the things we’ve done, you know we’re fond of Bourbon so we’ll start there although Whiskey provides more options which we’ll get to shortly, and of course the ubiquitous stemware. So, if you’re going to go amber then the shape of the glass is actually more important than the make of it. In other words crystal is a nice touch but not a necessity. There are several glass shapes that will do the job most admirably and still make the statement you’re trying to make, that you enjoy drinking a fine spirt and perhaps a cigar with friends and colleagues and want to make the event the best possible. All of these will accomplish that without you getting anecdotal about your wealth of knowledge. Now there are a few that can be used for both Bourbon and Whiskey and some you can’t go completely wrong with, but these tend be more frequently used for those who like their juice American made.

Bourbon glasses tend to be a little bit wider at the top to house slightly larger ice cubes, a trait that has become a bit more of a necessity now that the large ice spheres have become such the rage. 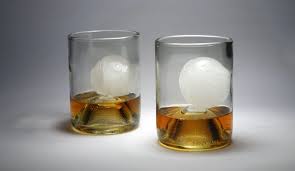 The large ice balls are the range but make sure you’ve got the right housing. Boys will be Boys. 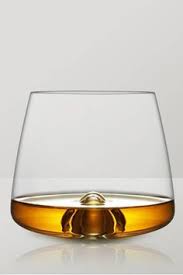 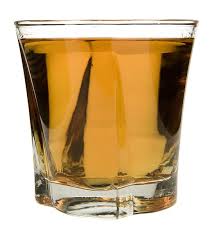 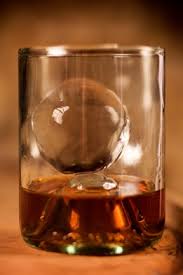 However one word to the wise, if you are going to rock the large ice-ball trend, please stop short of going with the engraving on the glasses. Nothing says Bed, Bath, and Beyond like MJB in white lettering on the side

One of our favorites is the Glencairn Wide-Bowl Whiskey glass, can handle both the rocks and the spheres. And it won’t be a faux pas to use with either one. 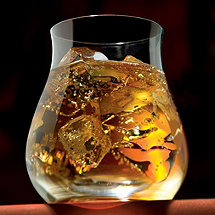 Now whisky has taken on a life of its own and come a long way from the circular crystal glasses with the ribbed tops, although it needs to be stated that you can never be overstated going with a classic! However now there seems to be classes for every specific type of whiskey, some that bring out the aroma better than others, another’s shape helps it breathe, etc. We took on the task to find out how many different types were available and there were tens of them. Way too many to personally try out so we had to do some sort of weeding out process that didn’t entail actually sampling product or we wouldn’t have made it to work anytime soon, so we inquired to some of the best spots where some of the most educated pallets raise their glasses to find out what they prefer to pour into. The catch is that it had to be available to be purchased for the home, and here are the best we found to be available that will you feel like JR Ewing and Gordon Gekko are coming by for a power cap. 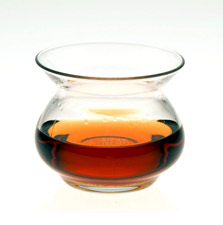 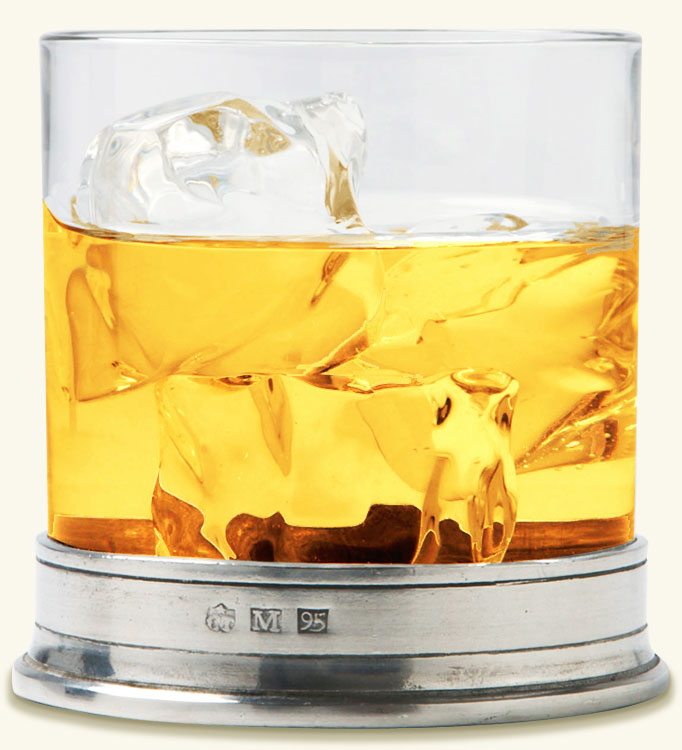 The distinctive shape alone makes the Match collection (shown to the left and right) stand alone. Made in Italy, they retail for $70-$120 USD but your chances of setting these down on the table and having a conversation piece that won’t find on anyone else’s bar is fairly high. Notice the wide opening that can work with cubes, large cubes, and spheres. The one possible flaw is that trying to look like James Bond while getting that last sip out was a bit challenging.

For those who are looking for that understated but classic presentation, you the only thing smoother than vintage SoHo glasses with matching decanter is the liquor you put into them. Bold yet dignified, like the finest spirits. From the moment you feel its weight in your hand, you realize this is no ordinary glass. The base alone is 1-1/2″ thick, a solid foundation for substantive walls with a cross-pattern cut exuding character. Plenty room for ice. 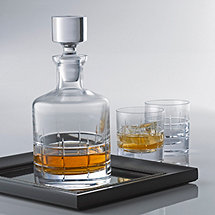 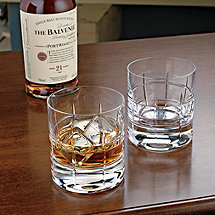 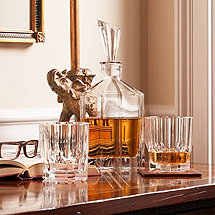