The stock market is now officially in “correction territory” as it has fallen to more than 10% below it’s high (hopefully) culminating with a 531-point drop on Friday August 21. Moreover all of the major indexes are below where they started for the year, which means for most investors weather it be your 401k, Investment portfolio, Mutual Fund, 403b etc, has lost money this year. So we wanted to look and see if this was another crash like we’ve seen in 2001 and 2008 or is this just the market taking a breather and heading upward into an election year? In either case what effect does this have on you and how should you play it?

For anyone who is involved with the stock market on a regular basis turbulence is commonplace. In fact, for the hedge fund managers and any short-term trader (formerly known as Day Traders before they became extinct) the fluctuations are necessary for them to make money. In fact if they had their druthers, they would like to see the ripples like those in Malibu on a daily basis. However for those whom usually watch the skirmish from a distance, like through a 401k or Mutual Fund, the waves look and feel more like the North Shore of Hawaii and nothing will keep you up at night more than watching your nest egg get scrambled while you’re waiting for the seas to calm. Well, ironically both of these perspectives are correct, even necessary, so we’re going to try and give you a straight forward view of what we see in the market now and where it might be going from here, and hopefully give you some piece of mind.

Firstly, remember the market LOVES clichés and often lives by them. Actually some the them are quite clever, “only when the tide goes out, can you tell who was swimming naked”, a play on how it’s real easy to look like a market guru when we’re in a bull market (going up) but when we are in a correction phase (down 10% or more) then you see whom really is a good money manager or stock pundit. Or what about “sell the Rosh, buy the Yom” and earnings play where you sell the stocks on Rosh Hashanah and buy them back on Yom Kippur just over a fort-night later, but my favorite is “sell in May and go away”, pretty straight forward meaning sell ALL your stocks and go to cash or bonds on May 30 and buy them back in November. This not only had worked consistently, but made such a substantial difference that most, not some, money managers either acted on this or made adjustments to their portfolios, and for good reason. According to the Stock Trader’s Almanac, the Dow Jones Industrial Average has had an average gain of 7.5% during the November through April period and a gain of only 0.3% over the May through October period, going back to 1950, to show how powerful this is with the compounding effect, the April 16 issue of Barron’s reported that $100 invested in the S&P 500 since 1945 would have grown to $9,329 if it had been invested only in the October-April period, but only $99 if it were invested between May and September. Makes a case for taking the Summer off doesn’t it? Of course, I being the quant that I am, I watched this phenomenon eat away at my portfolio returns for years before I finally acted on it three years ago, and I mean literally, I moved 100% to cash, including tax-qualified plans, and paid the price as the market rallied in 2012 through the “sell months” and then I had to wait for the boat to come back as then I thought I was buying too high, and it never did. I missed about a 25% rally since that time.

So that brings us to August 2015 where after eight months of work the major markets are officially under water for the year (obviously this is one in the win column for the afore mentioned strategy), which includes a 358 point drop on Thursday. Even more concerning is that the 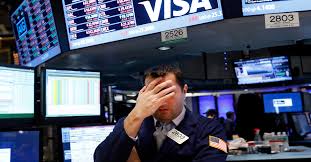 major averages have begun to technically break down, falling below their 200-day moving averages, a big technical level that analyst use to gauge market health. So should you move your 401k or your mutual funds to cash? Pull money out of your bank account and put it under your mattress? Try to avoid the financial Armageddon that Ron Paul is spending millions to promote? Ok, too much hyperbole but I think you get the point. I hate it when pundits come on financial channels and call this a “buying opportunity” even though it very well may be, but that is ONLY IF you have a decent percentage of your portfolio in cash and can move in and take advantage of the depressed prices. If you are fully invested or your 401k is already 100% in various mutual funds or stocks then you just have to ‘take the hit’ and wait for it to come around.

The take away from all this is no matter what the talking heads spatter on TV telling you to buy or sell, and how logical it sounds, there will be an argument just as compelling on the other side telling you the exact opposite. These are the times when you have to remember what your objectives are, where your portfolio stands ‘inception to date’ in regards to return since you started your program and keep it in perspective. You probably have experienced solid gains and maybe have given a little back or not made much this year, but if you were sitting in cash in the bank on thing is guaranteed other than you money being insured. It’s guaranteed that after taxes, inflation, and capital gains you have lost money. At current interest rates less than 1% on savings and CD not much more, over the past 1, 5, and 10 year periods you still have done better in the market. So as tough as it may be, roll with the punches and if you do have some cash on the sidelines, keep and eye on the S & P 500 and when it looks like a solid entry point, move some of that cash from the sideline into the game and try to take advantage of the dip. You can even pull it back out if you make a quick 10%, it will soften the blow of the first 8 months. Sit like a surfer in the water and wait for you your set. And just for fun, humor me, and wait until November when all of the “May Sayers” have come back!