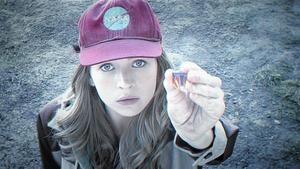 Like Britt Robertson, you may not believe the hype.

It’s the season of the blockbuster as typically in Summer there are a couple of films that drones of movie goers flock to see setting box office records. This Summer so far Jurassic World is the chosen one, smashing the global record with a 774 million dollar weekend out of the gate. However if you are not in the mood to follow the heard or watch dinosaurs devour humans, and much more graphically than in the previous two mind you, then we’ve compiled a list of some other Summer films that might make for a nice finale to a warm summer evening or close out a weekend. We also attempted to give you our ‘elevator pitch’ and a brief synopsis to help you make your decision.

A business executive who suffers yet another miscarriage is told she’s too old to carry a child but refuses to accept her fate. With Kim Basinger, Jordan Prentice and Peter Stormare. Written and directed by Anders Morgenthaler. Brainstorm Media

At an island theme park where dinosaurs have been resurrected through science, a new genetically engineered specimen escapes confinement and plunges the park into chaos. With Chris Pratt, Bryce Dallas Howard and Vincent D’Onofrio. Written by Derek Connolly and Colin Trevorrow. Directed by Trevorrow. In 3-D. Universal Pictures

A documentary tracing the early years of the late-night sketch show “Saturday Night Live” and its evolution into a comedy institution. Directed by Bao Nguyen. Abramorama

Me and Earl and the Dying Girl

An awkward high school senior is forced by his mom to spend time with a classmate he hasn’t spoken to since kindergarten, a girl who has just been diagnosed with cancer. With Thomas Mann, Olivia Cook and R.J. Cyler. Written by Jesse Andrews. Directed by Alfonso Gomez-Rejon. Fox Searchlight Pictures

One Cut, One Life

A documentary following nonfiction filmmaker Ed Pincus as he teams with a collaborator to make one last movie after being diagnosed with a terminal illness. Directed by Pincus and Lucia Small. First Run Features

Rebels of the Neon God

A restoration of the 1992 film about a cram school student in Taipei who becomes obsessed with a petty thief. With Chen Chao-jung, Jen Chang-ben and Lee Kang-sheng. Written and directed by Tsai Ming-liang. In Mandarin with English subtitles. Big World Pictures