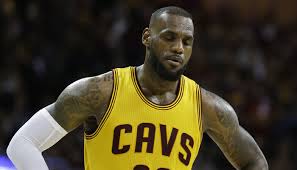 Back in 1988/89 the Detroit Pistons swept the Los Angeles Lakers in the NBA Finals 4-0, that’s what the record book reads. In fact if you check sources that weren’t even invented at the time series was played like Wikipedia and Google, the outcome is still the same. There aren’t even any asterisk after it. Now the Basketball aficionado knows that the Lakers were undefeated prior to the Finals in the playoffs at 11-0 coming off 3 straight sweeps until they lost their starting backcourt including the MVP of the year Magic Johnson just prior to the start of the finals due to injuries. However some 17 years later it still just reads 4-0. This is what LeBron James will have to deal with if he can’t miraculously continue to carry his team, franchise, city, and state on his back and deliver two more wins starting with game 6 tonight.

This series was set up to be the reigning MVP vs. the newly anointed MVP, King James vs. Steph “the baby faced assassin” Curry and his supporting cast that captured the best record in the NBA. The odds didn’t have it set up as a fair fight to begin with as the Warriors were big favorites, then for good measure they tied one arm behind the King’s back, by taking two all-stars off his roster, two of their “big 3”, Kevin Love (Olympian) and Kyrie Irving. So LBJ has done all he can to bring a win to his home city including dominating games with stats not seen since Hall of Famer Oscar Robertson. To this point, there has never been a player in Finals history that has scored an average of 35 points, 10 rebounds and five assists in the Finals. No one. James is currently posting an average of 36.6 points, 12.4 rebounds and 8.8 assists. Throw in an average of 1.2 steals for good measure. He’s logged a heart-stopping 45.6 minutes per game out of a total of 48 minutes in a game. All told, he’s played 228 minutes carrying the load. Moreover, with James on the court (only 22 minutes for the entire series) the Cavs are shooting 18.2% from the floor including 0-8 from 3, have more turnovers than assist at 4 to 3, and no fast-break points. It is truly night and day, but once again, they still trial 3 games to 2.

You can make a point that he is the best player on the court, even the world if you ask him, but one could argue that he has to put up those numbers because no one else can do so. With the loss of Love and Irving they simply can’t rely on JR Smith or anyone else to consistently contribute for 48 minutes so by process of elimination James has to score 40 plus a game for the Cavs to even have a chance. However despite the amazing ink he has put stat sheet you can only be the most valuable player if you’re team actually wins the title, otherwise there obviously was someone more valuable than you because they won! Makes perfect sense. He has had an amazing run but without the ring it just isn’t enough, and there are no asterisk when handing out the MVP trophy.