If you thought the last NFL season ended in a crazy fashion with controversial calls, mental lapses by both players and coaches that decided games, deflate-gate, the most unexpected ending in Super Bowl history, then you should expect the same or more from this season. I mean, just look at the facts. More undefeated teams late in the season than ever before, starting quarterbacks on the bench for more games than ever due injury or poor play, and despite top-heavy talent conferences every team looks like it can be beaten. Is it any surprise that all four road teams are favorites in the wild card round? In the end there is a dream match-up that would be a rating dream for the NFL but it seems very unlikely to happen because of the all of the unpredictability. In any case, finally the NFL playoff seedings are in place and there are some very interesting parings that could make this the best post-season ever, so here is the schedule and likely scenarios as well as our predictions so buckle up. 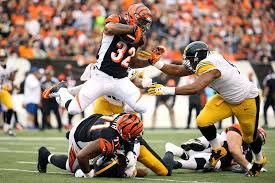 The wild card weekend opens up strangely enough with the AFC on Saturday and the NFC on Sunday rather than splitting games and giving the NFC an extra day’s rest. On Saturday the Steelers (-2.5) travel to Cincinnati to take on their inner division rivals whom will likely be without their starting quarterback Andy Dalton which will mean certain death and a very lucky draw for the Steelers as a #6 seed. As we mentioned before, a very strange and heart-breaking season for the Bengals who looked poised to get their first ever first-round-bye and top 2 seed in the playoffs going into week 13, sitting atop the AFC North at 10-2 with an insurmountable lead, having the second place Steelers at home whom they had already beaten earlier in the year, in the red-zone going in for the touchdown and a two-score lead when Andy Dalton throws an inexcusable pick then compounds the mistake by attempting to make the tackle, injuring his hand, and for all intent and purposes the season. How many things changed in their season on that one play. Damn, should have just ran the ball up the middle. Anyway expect a plethora of “what ifs” after Saturday. 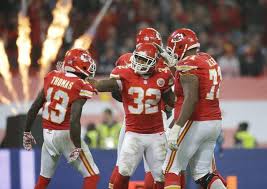 The other Saturday game is Kansas City (-3) at Houston once again, another road dog and frankly I don’t see how the Chiefs aren’t bigger favorites. The Texans are in the playoffs simply by the virtue of playing in the worst division in the AFC. They simply won the division because no one else seemed to want to. So at 9-7 they are this year’s aberration as they host the 11-5 Chiefs who are currently riding the longest winning streak of any team in the league at 10 straight wins. They pushed the Broncos to the brink and were one Phillip Rivers interception away from possibly winning the AFC West and hosting an opening round game. Instead they get a practice week before probably heading to Foxborough. Look for nfl playoff tickets here.

That said, let’s look at how we think this will play out. The betting lines will go true to form and the home dogs will leave many leaving early and disappointed as the Steelers will move on as will the Chiefs. That actually works out well for New England whom let the top seed slip away by losing 4 of their last 6 games and will be rewarded by getting the Chiefs rather than the Steelers whom present a huge challenge for the Pats because of their wide receiving core and the Patriots penchant for giving up huge yards to top receivers (just see Landry’s stats from week 17). Meanwhile the Steelers will head up to Mile-High for a rematch with the Broncos whom they beat three weeks prior. This is where things get interesting as we think the Steelers will repeat the feat a second time and move on to the AFC Championship where they will fact the Patriots who will finally be healthy again and Brady will have his full complement of receivers and should beat a Kansas City team that will simply be outmatched with Alex Smith calling the signals. That sets up a AFC Championship rematch of week 1 where Pittsburgh will head to the Razor to take on the defending world champs. 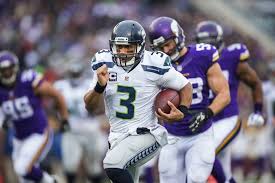 Like the AFC, both road teams are favorites going into wild card weekend, unlike the AFC the weather may be the storyline of the games. In Minnesota the Seahawks and Vikings are going to give the “Ice Bowl” a run for its money as the coldest playoff game in NFL history. Right now the forecast has changed so there won’t be snow and 1 degree F, but it’s looking like 3 degrees with a -7 wind chill. In the nation’s capital it will be much warmer, a balmy 61 but with showers and a very slow track which probably won’t give either the Packers or Redskins and advantage because both running games have been dormant so the team with the passing game that can weather the elements better will prevail.

In the first game Seattle visits Minnesota, I mean the REAL Minnesota, outdoors, potential snow late in the day, gloves, thermals, heated benches Minnesota. Not the balloon dome or the futurama center. Although these aren’t Bud Grant’s Vikings with Allen Page, Chuck Foreman, and the “Purple People” Eaters defense that practiced outside and lived these types of elements, so don’t they will be more battle tested, but it will slow down the running games and most importantly running quarterbacks which both teams poses. However you would have to believe this factor will hurt the Seahawks more as that is Russell Wilson’s game. Escape the pocket, break down the defense, and make plays with his legs to set up open receivers. That game plan will be seriously tested on the newest version of the frozen tundra. Moreover a late scratch by BeastMode means Christine Michael will be getting his first start at running back. That can’t be a good sign for the defending NFC Champions. Conversely it will be no picnic for AD and the Vikings but a short ball-control passing game may not put a lot of points on the board but you shouldn’t need much to win this game. Early on we liked the Hawks but with the injuries and elements we are switching sides to the home team. Vikings advance.

In the late game on Sunday the Packers travel to DC to take on the surprise team of the playoffs the Washington Redskins. Early in the season they were a team in disarray with a huge controversy at quarterback then suddenly “we all liked that”, they went on a roll winning 6 of their last 8 games to lay claim to the worst division in football but good enough to host a playoff game. Much like the Seahawks, the way last season ended has had lasting effects on the Packers whom still seem to be snake bitten after a painful collapse in the NFC Championship Game last year. The offensive line is not protecting Aaron Rogers like they need to be, and Eddie Lacy wanted to “beef up” to be more durable so he decided to eat an offensive lineman but the added weight has slowed him down and the Packer running game has given Rogers much support. This one will be close and although I hate it when people state the obvious, so at the risk of becoming what beheld, this one will come down to whom makes the least amount of mistakes. Not blown assignments but simple turnovers could decide this one. We think experience will carry the day and like the fact that the Packers and Rogers have been there so many times that they know what takes to move and will do so on Sunday.