Well the story that has held the League hostage for the past seven months is not behind it and much like last season now “The Shield” has to do it’s best regain it’s mojo and most of all its respect but fortunately the best remedy for that ailment is to get back on the field and the League does just that starting Thursday. That said, much like last year coming off scandals of a different kind the NFL put together one of the most exciting and memorable seasons of all time culminating with the most exciting (and controversial) final plays. So the bar is set really high but we think this season may surprise you by not only getting up to but over that bar. Here’s our preview of the upcoming season.

AFC – No doubt the balance of power resides in the AFC even though the Seahawks sent quite a statement on how far the gap was between the elite teams was with a thorough beat down of the Broncos two years back, only to relinquish that power the next year to the Patriots when they were on the verge of a dynasty. But top to bottom we think the AFC is the stronger conference, but at the very top we don’t see any separation between the two, so we wanted to break it down by division starting with the strongest. 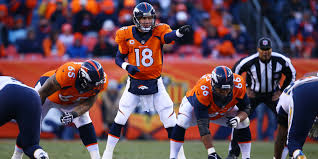 AFC West – Yes, the division formerly known as the “AFC Weak” that we use as a weekly punch line is now the strongest division, top to bottom in the league. With perpetual contenders Denver sitting on top and their seemingly ageless quarterback, who will be pushing 40, Peyton Manning and the Broncos lead a division on the rebound. The Broncos have won four consecutive AFC West titles and although it will be much tougher this year, we look for them to do it again. What is surprising is, despite all of the success of the franchise, that it will be the first time they have ever made the playoffs five consecutive times. Their schedule is top-heavy, going on the road in 4 of their first 6 games but once they’re over that hump they should be in good shape and finish with 3 of their last 4 at home in the Winter. Our prediction 12-4, division champion.

Next up was a tough call because there is serious parity in this division, and there will be not be any weekends off. The road games will be brutal with every team having a substantial home field advantage with the possible exception of San Diego because they may have lost a good part of the base with all of the move to LA talk. Just the same we like the San Diego Chargers to come in 2nd in the best division in football.  soft first four games should have them at 3-1 out of the gate with wins over the Lions, Vikings, and Browns. They may even go on the road and beat the Bengals to be 4-0 in a perfect road but it all stops Week 5 on a Monday Night in Pittsburgh, but the start will provide them with the boost they need to get over the late season slump that seems to follow them each year. If Rivers can stay healthy this team can be a wild card team but they will have to prove they can win on the road, particularly in a tough division. Our Prediciton 9-7, last wild card spot.

Sorry Oakland but if we put the Chiefs at the 3 then the Raiders will be last again this season but I have no choice. The NFL did the Kansas City Chiefs no favors with the first four-week stretch of the season. Included is a Thursday night home game against the Denver Broncos and road games with the Green Bay Packers and Cincinnati Bengals. It’s difficult to imagine the Chiefs will start better than 2-2. However they will dig out of that hole and present some real problems for others in this division and around the league. Andy Reid will work his magic and get the most out of this team but a schedule that is daunting by any standards will keep them out of the playoffs. Our prediction 9-7 first group out of AFC playoffs.

The Oakland (LA) Raiders have won a total of 11 games in three seasons. They are starting another coaching era, this time with Jack Del Rio, who was head coach of the Jacksonville Jaguars from 2003-11. This schedule is not nearly as difficult as last year’s, which was the toughest in the NFL. The Raiders have some winnable games and with young foundation players, quarterback Derek Carr and linebacker Khalil Mack, the Raiders should double their win total from 2014. After back-to-back solid drafts, the Raiders have raised their talent level and added some solid building blocks, particularly Mack, Cooper and Carr. They won three of their final six games last season, and a .500 season this year is not out of the question. That will depend on how quickly the team adapts to yet another coaching change. Unfortunately for the fans of the Silver & Black they play in the toughest division in football and that means a .500 season and 4th place in the AFC “Strong”.

NFC South – Look out for this division, as regardless of which team ends up on top it really wouldn’t surprise anyone. Much like the AFC West, parity is the theme for this division and it could come down to a couple of plays here and there. Also, it may be the best division top to bottom for quarterbacks, it certainly will be the most exciting. The pocket passing of Brees and Ryan vs the double treat of Newton and Winston. If we must pick a winner we’re going to go with experience that means 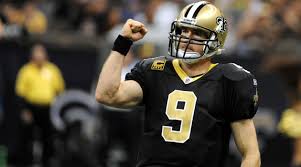 Drew Brees and the New Orleans Saints. Now there are some concerns defensively, primarily in the secondary where Despite the addition of free agent Brandon Browner, the secondary is a problem. Third-year pro Kenny Vaccaro is trying to bounce back and top cornerback Keenan Lewis underwent hip surgery Wednesday. This is a secondary that could be put at risk because the front seven doesn’t have many natural pass rushers. Cameron Jordan is a Pro Bowl player, but there aren’t many proven playmakers otherwise. We still think they will win the division in a tight race, but fade short of the NFC title game.

Carolina Panthers – In the spirit of good quarterbacks this could be Cam Newton’s breakout year but he will need someone to breakout in the skill positions with the injury to Kelvin Benjamin. However it’s not the end of the world since Newton completed only 46.7 percent of his attempts to Benjamin last season, so his season-ending injury might not be that devastating for the Panthers’ offensively but Cam is going to need some help. His depth chart reads Philly Brown, Devin Funchess, and Ryan Kalil, certainly not the most intimidating in the league. Defensively they were below the league average last year and we look for that improve dramatically but not enough get them any further than a WIld Card.

Atlanta Falcons – New head coach Dan Quinn from defending NFC Champs will be the shot in the arm the franchise needs but he won’t be enough to turn the ship around this quickly and the Falcons have had issues for years on both thier o and D lines and those won’t be resolved overnight. Hard to believe Roddy White is turning 34  this fall and perhaps has lost a step. Targets might be a big challenge for Ryan this season as he may not have ample supply. Our projection is back to the lottery for next year and a struggle to break .500. 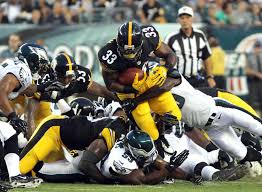 AFC North Preview – If the NFL had an NHL equivalent the AFC North would certainly be it. Historically it’s been known for strong defense, brutal inter-division games, and if you can’t run it ain’t gonna’ be fun. This season isn’t shaping up to be any different as the inter conference schedule alone is tough enough to raise the strength of schedule for all of the teams to the upper third of the league. Unfortunately for the NFL Norris Division, how deep they go in the playoffs could be a matter of how much is left over from beating themselves up during the regular season, but we think in the end the Pittsburgh Steelers will sit atop a very competitive division. Big Ben and the offense broke club records for points, total yards, yards passing per game, and first downs in a season, last year. That’s pretty impressive considering the lineage of those powerhouse teams of the 70’s. Pittsburgh has the skill position players to match up with anyone in the league, Ben Roethlisberger at the helm, LeVeon Bell at running back, and Antonio Brown breaking big plays on the outside. But on the other side of the ball they switched defensive coordinators and last year slipped 13th yards allowed in 2013, to 18th last year. That could be their Achilles heel as they try to work their way through long and tough season. Our prediction 10-6 tie-breaker division winner.

The Ravens are still wondering how they blew two 14-point leads to the eventual World Champion last year in the divisional round and can’t help but think they would have had good shot at a third ring. If they can parlay that motivation into the first part of the season they may be able to get out first and then hold on to the division title. I think critics can stop questioning Joe Flacco as not only does he have a ring but he went toe-to-toe with Tom Terrific in that game but came up 2 yards short on his final pass that was intercepted to seal their fate. This year they have their entire offensive line back protecting Joe, in front of an offense that may be a year older but still capable of putting points on the board. We do have concerns about them being able to stretch the field without Torre Smith or the over the middle threat of Steve Smith, and if the defense has to carry this team then our predicted 10-6 could easily end up the reciprocal 6-10 and well out of the playoff picture.

Cincinnati Bengals – Player you’ll be talking about: Tight end John Peters — Honestly, this signing could wind up going nowhere, but Peters did come from nowhere in the first place and could take advantage of the Bengals’ subpar tight end situation. What to watch: Can Andy Dalton actually get the Bengals past that playoff hurdle? They keep looking so good during the season and they keep coming up just short in the postseason. The Bengals had a solid offseason, and seeing if the new pieces actually fit — and whether Marvin Lewis can actually fix the issues at hand — is the most interesting bit. Our Predition 10-6

Cleveland Browns – What to watch: Johnny Manziel is the guy to watch, right? That’s who everyone will be talking about — but realistically, Manziel isn’t a candidate to start and folks should instead be focused on how the rest of Cleveland’s offense is adjusting. Josh McCown will be the starting quarterback, the Browns will try to get Terrelle Pryor situated at receiver and rookie running back Duke Johnson will try to claim the starting role. All three which highlight the more entertaining storylines. Most important position battle: Wide receiver — Josh Gordon is a lot of wasted potential at this stage. The team brought in Brian Hartline and Dwayne Bowe, and then there’s Andrew Hawkins. Those are good players to pay attention to, but it is unclear where they’ll play. Our Prediction 8-8

Next up…AFC can the Pat’s rule again?