Over the past few weeks we’ve been looking at some alternatives to the conventional ways we cook as part of our never ending quest to save time and eat better. Today we have paired that with a recipe which will also be delicious and have multiple uses. We are going to make Coriander-Crusted Roast Beef in our newest and favorite appliance, the air fryer.

Now normally this dish requires hours in the kitchen to prepare but we have a way to make it just as succulent and tasty in less than half the time. The best thing about this recipe, other than the taste, is the various ways to enjoy the end result. The roast beef obviously makes for a great main course but it arguably is just as good making sandwiches for weekend football gatherings, or as a stand-alone snack after a workout. The recipe calls for a crust of crushed coriander seeds and black peppercorns, but if coriander is a bit too strong of a taste you can substitute any crushed seed such as fennel, cumin, or in our case we will use sesame.Crusted Roast Beef 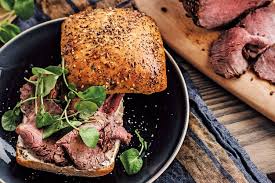 Combine seeds and peppercorns in a plastic bag and crush with a rolling pin (or heavy skillet if you’re kitchen isn’t quite as chef ready!) until just cracked open. Mix in oil and salt, then stir to form a spice paste. Spread paste evenly over the beef.

Transfer beef roast to air fryer and cook at 325 degrees, turning roast every 10 minutes until golden brown. You can also insert an instant-read thermometer into the middle until you get a reading of 125-130 degrees, which should be about 40 minutes. This would may the roast come out a nice medium rare.

Transfer the roast to a cutting board and let rest at least 15 minutes. Cut the beef into thick slices and serve warm. Now if you’re planning to use this for sandwiches later on, wrap the roast in plastic wrap and refrigerate until firm, at least 4 hours and up to 5 days. This will help cut very thin slices of meat.

For sandwiches, use a robust bread, heavily seeded rather than typical sandwich rolls, with arugula rather than lettuce, and if you’re really bold top with a horseradish sauce. If that’s not your favorite flavor than use a better golden brown mustard instead. Tomatoes make a great compliment as well.